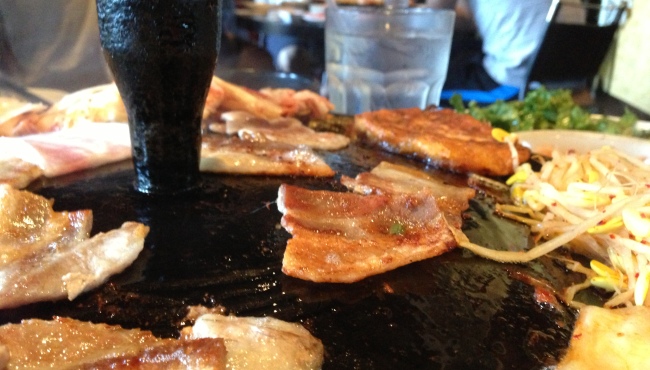 Do you know why I say that?  Because food connects people—food connects cultures and fosters a greater understanding of all walks of life.

My group from AALEC—the Asian American Leadership and Educational Conference held every year at SMU (Southern Methodist University)—planned a reunion for last April 14. The plan was set to go to a restaurant near Super H-Mart, a Korean supermarket in Carrolton. (Side note: another one is opening close to my house and I’m super excited!)

Well, I can’t really say it was much of a reunion since it was actually cancelled a few hours before I was supposed to start, but I forgot to check. Whoops. Luckily for me, my friend and fellow AALEC group member was already waiting at Café Mozart next door! Since we made it all the way out there, we decided we’d at least get a decent meal out of it. My friend is Korean, which made her the perfect companion at Omi Korean Bar & Grill right next door!

When we got there, we decided to splurge a little bit and have samgyeopsal, which is basically fatty slices of uncured pork belly grilled at the table.

I don’t know if I’ve ever had samgyeopsal before—maybe I did when I was younger but didn’t realize it—so I decided to go with the most fun way: treating it as a completely new experience!

So let the record show that on April 14, 2013, I tried samgyeopsal for the first time and actually learned how to eat it!

Honestly, I’m really glad I had Julie with me. If I didn’t, I’d have no idea what to do! I’d probably burn the pork. Or eat it undercooked. Neither would’ve been very good…  Luckily, Julie did a great job pointing out how to eat everything, and what everything is!

Besides, samgyeopsal is just plain yummy. Some of it didn’t need an explanation—I just thought eating it would be more fun!

Step 1: Grill your pork! Once it’s finished, the meat part will be a nice, golden-brown!
Step 2: Take your lettuce and wrap your pork inside it!
Step 3: Don’t forget a little bit of sauce!
Step 4: Wrap it up and EAT IT!

Another fun one was wrapping the pork inside the round, pickled, pink things (they’re at the bottom of the picture of Julie) with lettuce and a little bit of sauce—pick your favorite one!

A type of namul… kongnamul, maybe?

Fried rice with our leftover pork and veggies!

Tagalog word of the day: Kamusta
Closest word to “hello!” (Literally “how are you?”)
(Kamusta ka? = “How are you?”, only used as a question)

As it turns out, I do know enough Tagalog to be able to exchange some basic phrases! I was able to exchange a Kamusta! for an Annyong! Fun, right? And comforting to realize you know more than you thought you did. And besides, talking and samgyeopsal just go together!

A funny little thing that Julie noona mentioned was that Korean food is actually kind of unsanitary when you really think about it. You’re using the utensils you eat off of (whether they’re chopsticks or spoons) to take more from the shared plates. I mean, do you honestly think they’ll give two bowls for soup? Because they won’t (usually). But Korean food is all about sharing. I’d rather take the “risk” compared to eating my own lonely meal—”family style” eating builds relationships!

After lots of eating, talking, and fried rice with our leftover pork and vegetables, we finished all our food. Yes, all of it.

Most of the little pieces disappeared, too.

Lol figuring out how to pay evenly isn't easy when you don't have $1 bills. 😬 @son_julie

For the sake of continuity, I’d like to add that this meal was completely inline with my “weekday vegetarianism,” since samgyeopsal happened on Sunday! Normally, I don’t crave for meat much at all—I don’t consider fish as “meat”—but I have a weak spot for most Asian meats, especially Korean meat. A burger or steak doesn’t phase me, but samgyeopsal or bulgogi will. (Or the ribs I had at A-Frame last year!) Maybe it’s an Asian thing?

Either way, the meal was daebak (awesome)! I really enjoyed it, and I can’t wait to do it again sometime!