For the last week, I’ve been constantly thinking of what to write. There’s so much that happened in California that I have no idea how to cover — how would I talk about spending time with relatives? As fun as it was, I can’t just write a synopsis of our conversation without the risk of boring everyone (including me) to death. What about New York? I have to get to that sooner or later!

That’s when I realized something: I’m not here to write a diary of my encounters in Los Angeles or San Francisco or northern California! If I wanted to write a diary, then I should’ve done that immediately after each day in California, not nearly a month after returning home!

I guess the number one reason I wanted to avoid skipping parts of my journey were because I didn’t feel it was fair to the people, mostly family, I had met during my trip. Is it wrong to purposely cut out my recollection of the time I spent with them? I’ve come to the conclusion that no, it’s not.

That’s why I’m going to just jump right in to one of my favorite cities: San Francisco. 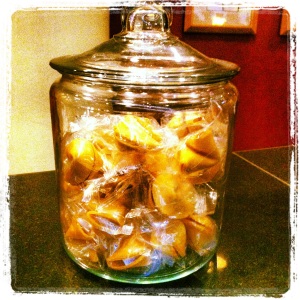 There’s something I really love about San Francisco. I love the long, curvy streets and the heavy Asian influence. I love the cold, breezy weather and I love walking around in a jacket in July!

The hotel had fortune cookies inside a glass container for their guests. Jude and I each took one — I got 500 points and Jude got a free room upgrade!

The first place we went to was Chinatown. Personally, I think Chinatown is really cool. Jude and I even got those touristy squished pennies from the machines dotted around the area.

In Chinatown, we met with the AADP (Asian American Donor Program) and talked about some of our ideas for getting Asian-Americans to join the bone marrow donor registry while eating really tasty Vietnamese sandwiches from Saigon Sandwich Shop.

After that, we explored Chinatown some more. Armed with pocket cash, I set out to buy really cool things (because cool things are simply cool)! The first thing I bought was a pack of red envelopes traditionally given out on Chinese New Year. I bought a design of fish — the Chinese word for “fish” sounds like the Chinese word for “plenty” — and peaches which supposedly bring long life. 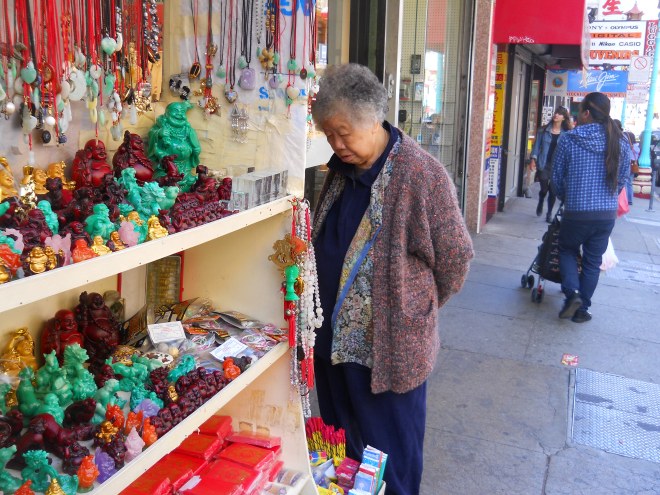 I also bought a really cool shirt of a Chinese take-out box that says “Got rice?” on the front. It was sold uniquely by that store so I really doubt anyone else I know will wear it around. (I’m unique!) I also got a phone holder that you keep underneath your clothes. Now everyone trying to steal from me will know I’m a tourist because I’m reaching under my clothes for my belongings.

After Chinatown, we hit the next Asian enclave: Japantown.

I just couldn’t get enough of J-Town in Los Angeles that I had to go to Japantown (also called Little Osaka) in San Francisco! Entering the area, I was greeted by the Peace Pagoda—a five-tiered stupa presented by the people of Osaka, Japan. 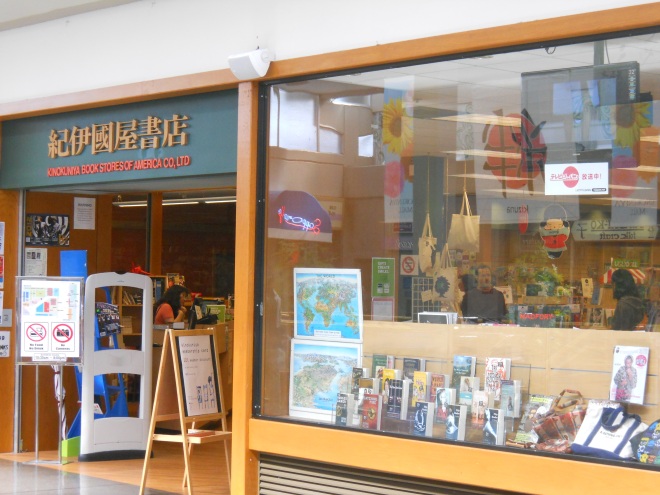 As I’ve mentioned before, I love bookstores like Kinokuniya and naturally, I spent forever in there! A really interesting book I found was Diary of a Wimpy Kid by Jeff Kinney… translated into Japanese! They had all of the books in Japanese, even Dog Days which was released in theaters this month! (I saw it on Saturday!) I also found two books about macarons, my favorite French confections!

I left Kinokuniya with a book called A Geek in Japan, written by Spanish-born Héctor García, owner of the blog kirainet.com (also called A Geek in Japan). Jude ended up buying the first volume of the Pokémon Adventures: Diamond & Pearl/Platinum manga. Lucky for him, I had volume 2 at home!

The hunger set in around five o’clock in the evening, so we decided to go to Mifune. 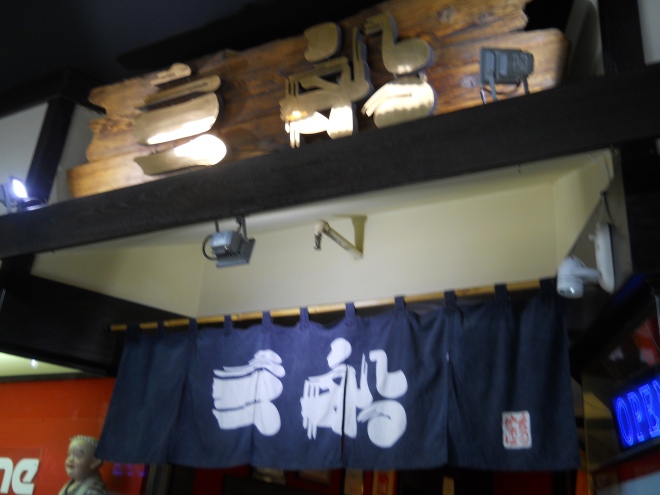 I ordered a bowl of hot udon noodles and a bowl of curry rice. It was perfect for the 50-something-degree weather in San Francisco! 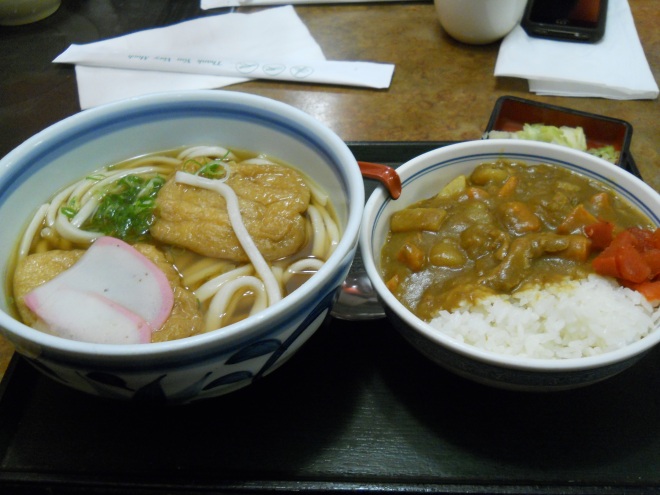 I just couldn’t end my trip to Japantown with only a book. Before leaving, I ran into Maido (right across from Kinokuniya) and bought myself two notebooks: a Visual-Aid notebook showing languages spoken around the world and a You plus notebook of a cup of coffee! (I love the minimalist effect of the second notebook!)

Back at the Hotel

We ran around San Francisco for a bit more before returning to our hotel. 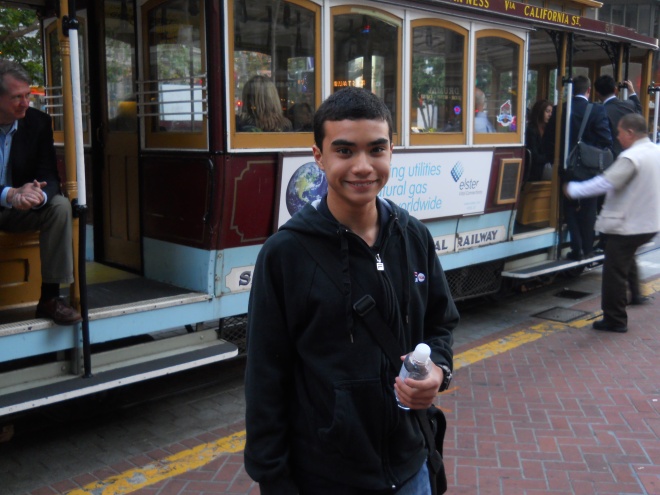 We decided to sit down and have dessert. For those of you who don’t know me well enough, I never have dessert and neither does anyone in my family (although my dad and brother probably want to). 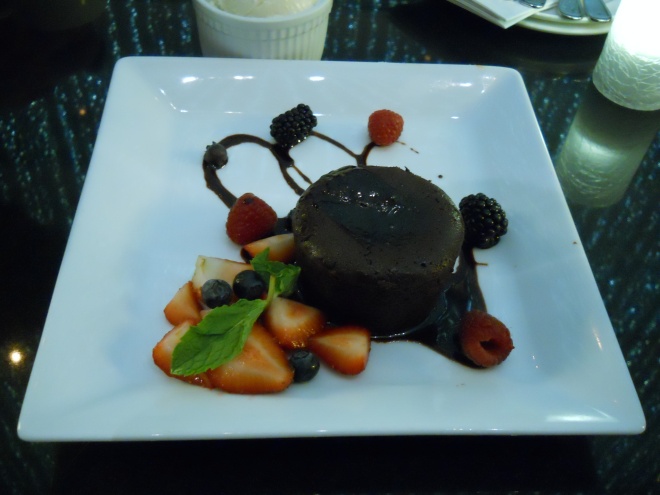 Our order — or more specifically, my order that I shared with everyone — was a Ghirardelli molten cake with a chocolate ganache sauce drizzled on top. It was served with strawberries and vanilla bean ice cream.

Let’s just say I enjoyed it.

Our final day in San Francisco started with cable cars. We decided to take the cable car from our hotel up to Chinatown again so we could get dim sum.

When I said “long, curvy streets,” I meant long, curvy streets. Dallas is a very flat city — no hills or mountains, just flat land. San Francisco, on the other hand, is very hilly. My number one worry about the cable car was falling off and tumbling down the street! If it went faster, it could be a mini-rollercoaster! 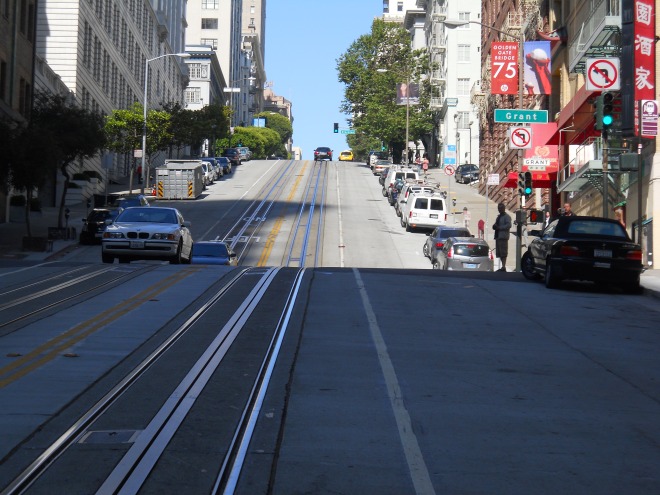 San Francisco is also home to the most crooked street in the world: Lombard Street! It consists of eight extremely tight turns. How in the world do people live on that street? 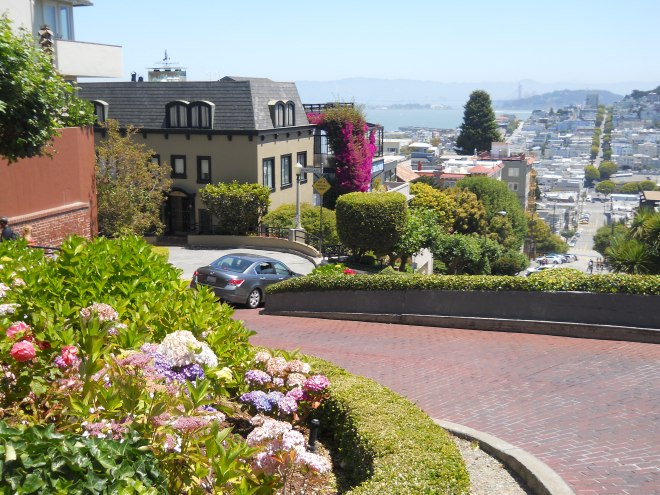 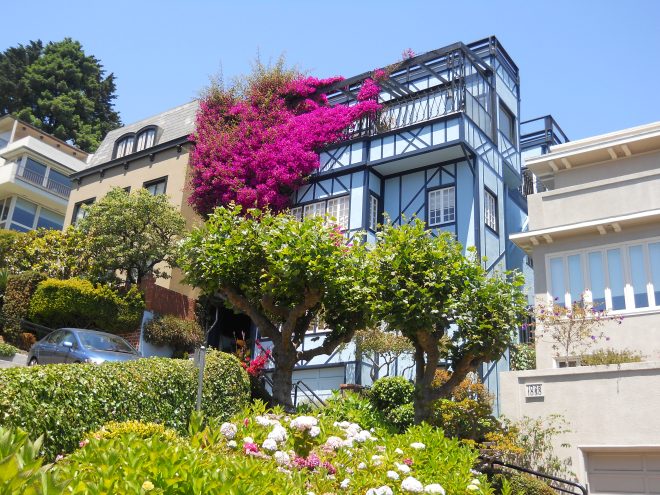 Chinatown, oh Chinatown… I really just can’t get enough of this place! What’s not to love? The buildings are obviously Chinese-inspired and you can buy practically anything! (Jude bought a backscratcher for 99¢! I had to resist the urge to buy the paper dragon.) 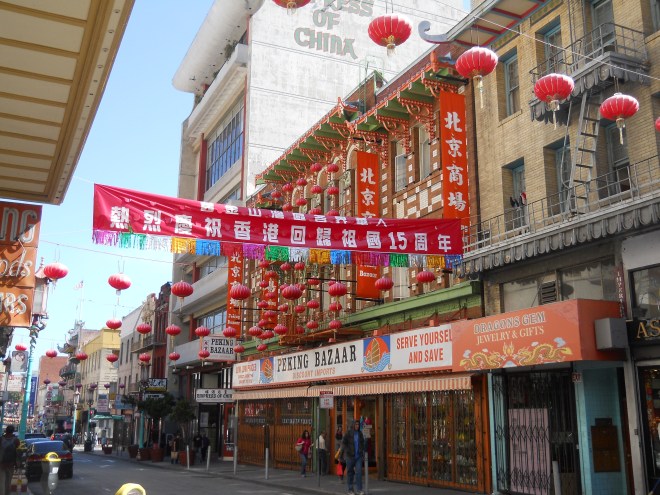 We ended up at a dim sum place. Personally, I love dim sum but I always have a big problem: I don’t know what the heck some of the stuff is! Dim sum is definitely more fun with a Chinese person who actually knows what to get, but unfortunately, no one in my immediate family is Chinese. Obviously, my small portion of Chinese blood (yes, I do have ancestors who came from China) offers no help. 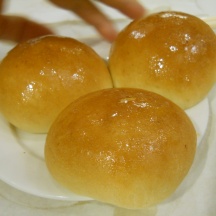 We walked back from Chinatown to our hotel, which led us through the financial district. Is it wrong that I love that area? Big buildings and hilly streets are definitely my thing.

On our way out of San Francisco, we stopped by San Francisco’s Little Italy (North Beach). We found ourselves at Original Joe’s, an Italian restaurant.

I had a rigatoni all’amatriciana. Italian food isn’t my favorite food in the world, but it sure tastes good and feels very comforting. 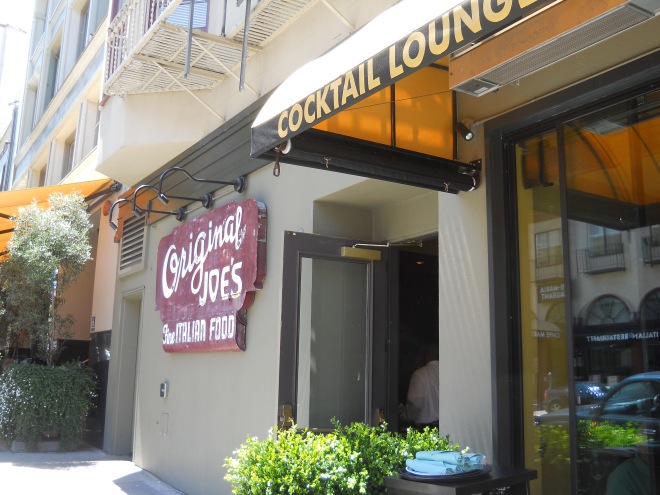 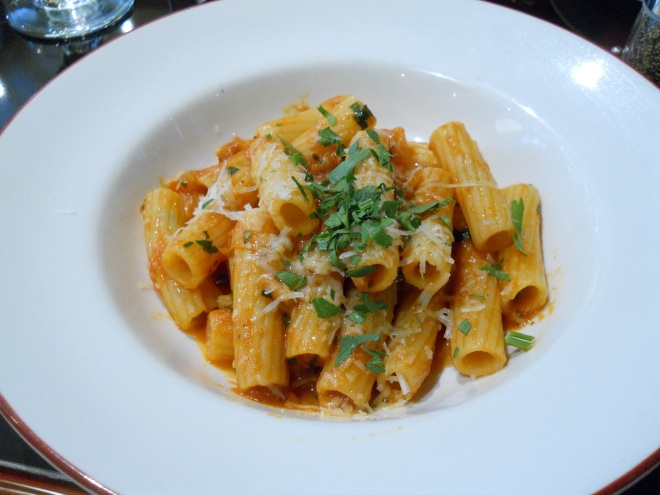 I can definitely say I enjoyed San Francisco. The city is really cool to visit, and hopefully I’ll be back in the near future! Besides, I have some unfinished business — I still need a picture of the Golden Gate Bridge!