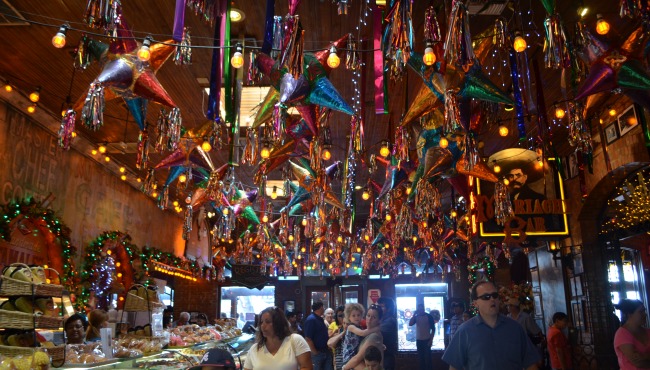 Last month, I spent a weekend in San Antonio. Only about an hour away from the capital of Texas: Austin—the city known for its eccentricity and vegetarianism, and more recently its fight to protect women’s autonomy from (an arguably) crazy governor. San Antonio, however, is an area with a heavy Mexican influence, in case the name “San Antonio” didn’t already tell you that! The entire city brims with that Latin flair, that excitement and passion that Latin cultures always have.

Even though that weekend was supposed to be my break, I felt the itching need to do something. Really ANYTHING outside of the hotel! But my curse of not being able to sit down and rest turned out to be a blessing, since the San Antonio Market Square turned out to be an incredibly vibrant place! From live music to street vendors to indoor stores selling art with a Mexican flair, how can you go wrong?

Colored cut-outs hang on top of the square, making the “fiesta” atmosphere even more vibrant!

A variety of hats sold by a vendor outside. (The Pokémon drawings definitely caught my attention!)

A very young Latina singer from San Antonio; she sang a mix of Selena and other big Latino artists.

A variety of Mexican pottery.

A variety of Mexican figurines.

A variety of Mexican pottery.

My entire family collectively decided it was also time to have some postres (desserts), since we ate fish tacos by the pool only hours before. ¡No hay problema! One of the restaurants we always go to in San Antonio—Mi Tierra—has dessert!

So in we walked.

Mi Tierra has this incredibly colorful Christmas-theme going on in most of the restaurant. It’s basically an eternal Navidad in there! Since Christmas (and December in general) is my favorite time of the year, I’m not complaining. 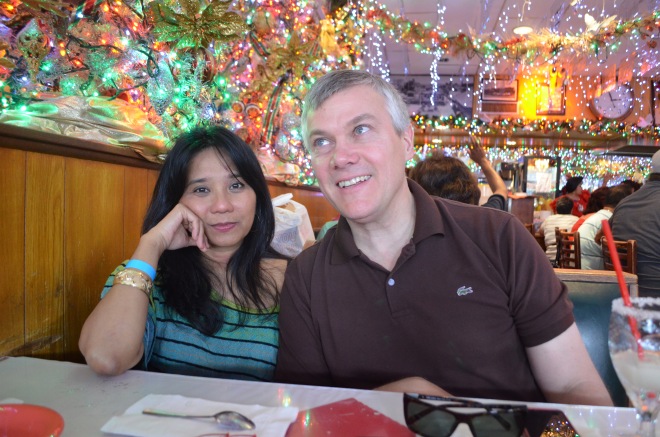 Originally, we came in there with the idea of only having desserts, but that changed very, very quickly. Suddenly, I became very, very hungry (even though I just ate not that long ago). Truth is, I don’t think anyone who’s lived in Texas—any of the major cities, can’t speak for rural Texas since I’ve never been there—has a secret weakness to Mexican food. And a lot of the time, that weakness grows and expands into other Latin countries: Colombian, Argentinian, Salvadorian… the list goes on. 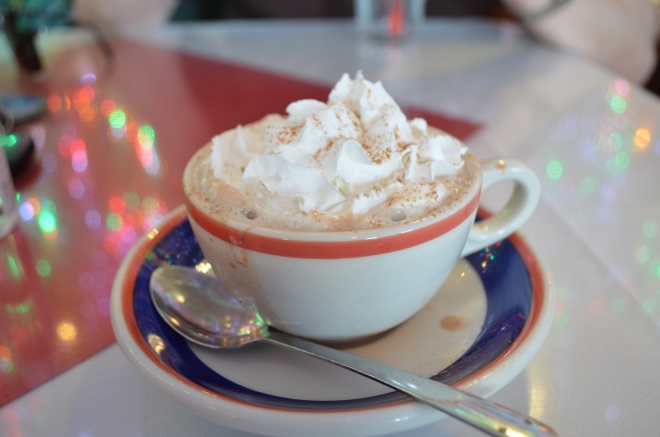 Because of some bad timing on our part (I wanted more lunch, but Mom and Dad wanted dessert only), dessert came second. In a little plastic container, of all things. I wish it would’ve been in a nicer container, but it’s probably for the people who usually order it as take-out. I loved the sweet, creamy taste of the fruits and whipped cream mixed with the cake. Plus, the colors make it visually appealing, even if presentation isn’t perfect.

And finally, the main entrée: cheese quesadilla! Not necessarily super exciting, but it was just one of those days where I was in a quesadilla kind of mood. (And Mexican restaurants, especially from what I’ve seen in San Antonio, tend to be notoriously bad when it comes to exciting vegetarian options.) But that’s fine, I enjoy cheese quesadilla! It’s something I had as a kid, until I eventually added chicken and vegetables, but then I had to take out the meat when I became (almost completely) vegetarian/pescatarian. Either way, the comforting blend of cheeses made my stomach feel happy, and the soft, grainy, warm tortillas just added to the comfort. Mexican food (or Tex-Mex food) truly is the ultimate comfort food, with Italian food probably coming next.

San Antonio truly is an interesting city, and if you happen to go out to Austin, Texas, whether you’re a Texas native out to support Texan women (or see the Capitol, because people do that too) or an out-of-stater wanting to visit the music capital and vegetarian food capital of the world, take a little stop in San Antonio to see another side of Texas—the Mexican-influence on good ol’ Tejas.

The San Antonio Market Square is such an exciting place. Truly the only word that can describe it (and the city as a whole) is “fiesta!”

One thought on “San Antonio Market Square: A Fiesta”

Si fui motivo de dolor, Si por mi cansa el débil tropezó, Si en tus caminos yo no quise andar, Si vana y fútil mi palabra fue, Si al que sufría en su dolor dejé, No me condenes, tú, por mi maldad. Perdón, o Dios.
Just got back from Reno and WHAT A DAY! Campaigned hard for Bernie Sanders, re-learned how to say “do you know where to vote” in Spanish, and even became a caucus observer! And then it turns out it was a big win ☺️ #nevadacaucus #notmeus
“It’s just a game, but for the record, we’re winning.” - @gileenbean
Crashed a Galentine’s Day 🤷🏽‍♂️
Do your civic duty! Vote for Bernie in the Democratic primaries!
Today in iconically Josh & Courtney vibes: spent the evening volunteering with the Immigration Institute of the Bay Area calling new citizens to remind them they should vote in the primaries on March 3! #VOTE 🗳
The term you’re looking for? It’s “glow up”
What happens in Vegas... stays in Vegas...
After what can only be described as an exhausting week, I’m so thankful to have an amazing best friend who’ll escape with me into San Francisco for dim sum and tea tastings this Lunar New Year! Relieved to be starting the year off with positive energy, a renewed sense of purpose, and the affirmation of those dear to me Not pictured: us collapsing after getting stuck in traffic for ALMOST THREE HOURS
Happy birthday, Courtney! Thanks for this amazing experience as I continue to contemplate moving to Spain (which means you have to visit!) 👀🇪🇸