Malala Day is not my day. Today is the day of every woman, every boy and every girl who have raised their voice for their rights. Malala Yousufzai

Yesterday, July 12, was Malala Day, the birthday of a courageous girl from Pakistan who was shot by the Taliban. Why was she shot? Because she wanted to go to school. She celebrated her 16th birthday yesterdat by giving a speech at the United Nations, demanding all governments to ensure free compulsory education for every child across the globe.

It’s so incredibly easy to take education for granted. I definitely have, and I’m sure many of you have too at some point. It’s almost unfathomable to think that there are children who don’t go to school.

About 80% of Nigerian children don’t have textbooks for every subject, and almost half of Nigerian students who have completed grade 6 can’t read. In India, fewer than half of grade 5 students could read a grade 2 text, and the numbers aren’t improving. In Pakistan, the government spends a measly 2% of its budget on education, and many districts don’t expect nor allow girls to attend schools. 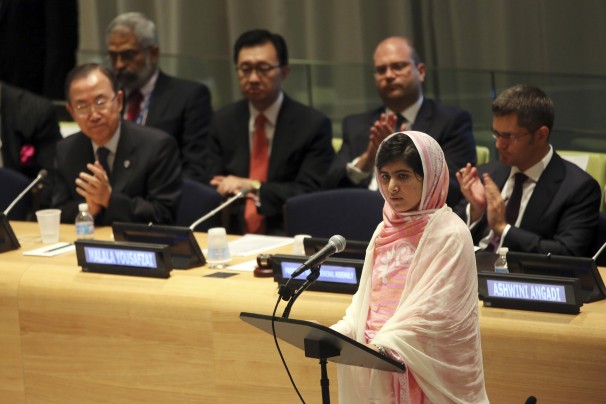 The terrorists thought that they would change our aims and stop our ambitions but nothing changed in my life except this: Weakness, fear and hopelessness died. Strength, power and courage was born. Malala Yousufzai

I’m incredibly blessed to go to a private, Catholic school and get a Jesuit education. I’m blessed to live in an area with great public schools. I’m blessed to have this opportunity, and I realized that every time I uttered an “I hate school” or an “I wish I wasn’t here” is an insult to the 57 million children who dream of the opportunity I have. While students all over the world have little access to textbooks and other school supplies, I sit here in my room typing on a MacBook with my school-issued iPad at my side. I know that in the fall, I’ll go back to state-of-the-art facilities with air-conditioned rooms and Smart boards in every classroom, while other children won’t be going anywhere when their school year starts.

[The terrorists] think that God is a tiny, little conservative being who would send girls to the hell just because of going to school. The terrorists are misusing the name of Islam and Pashtun society for their own personal benefits. … Islam says that it is not only each child’s right to get education, rather it is their duty and responsibility. Malala Yousufzai

It’s so easy to feel entitled to everything, and it’s so easy to forget what a great privilege an education really is. While I may not have the same amount of money and material goods as many of the students who go to my school, I still have it pretty good. I don’t have to worry about getting hurt or killed just for going to school. I don’t have to choose between making enough money to survive and getting an education. I never have to fear of losing the right to an education simply because of cost or distance.

I know so many people who simply take their education for granted. School is all about socializing and games. Classwork? Who cares about that! Grades? Those are supposed to matter? This state of mind is truly sad. With so many children out there who risk their lives to just get a portion of the education you get, how can you not take your education seriously? I’m gifted with the opportunity of a stellar high school education. What’s important is that I make good use of it.

It’s been an interesting summer so far. I spent my June doing 6 ½ hours of summer school, Monday through Friday for three weeks, where I took an introductory art class and a computer graphics class. On Tuesdays, Wednesdays, and Thursdays, I also had 3 hours of SAT prep classes.

This month, I’ve been doing 3 hours of a Spanish immersion class at the Dallas International School, where I met people from all over the world (France, Mexico, Colombia, Argentina, Taiwan, South Korea, etc.)—people learning Spanish with me, people learning French, and people coming from far and wide to learn English. On top of that, I’ve been continuing with my 3 hours of SAT prep classes.

While many people (especially my dad) think I’m over-scheduled since I really don’t have much of a break for myself, I come home every day—whether at 4:00, 6:30, or 8:30—feeling incredibly happy and proud of what I’ve accomplished. I have high aspirations for myself, and I don’t want to waste a single opportunity I have.

I want to go on to higher education. Right now, I want to major in International Relations with a pre-med track, and go further on to medical school. Beyond that, I want to influence international laws and make sure every person has access to healthcare, regardless of their ability to pay. I want to make a difference in this world. I want to be the change I want to see in the world. The only way for me to be this change is by making the most of the education I have. Today.

I’m not the only child with big goals. Many children across the globe have big goals, too. But how can those children reach those goals when they don’t have access to an education? To use the words of Malala, “We cannot all succeed when half of us are held back.”

They thought that the bullets would silence us. But they failed. Malala Yousufzai

In the Universal Declaration of Human Rights, the United Nations declared under Article 26 that “everyone has the right to education.” Every child, deserves free, compulsory education, regardless of caste, creed, sect, religion, or gender.

Here in the United States, President Obama wanted an expansion to preschool programs during his State of the Union address in January, saying he wanted to work “with states to make high-quality preschool available to every child in America.” President Obama allocated $75 billion in new funding over the next decade to help expand access to children who aren’t already in preschool. When I heard this, I was overjoyed. The children of the United States deserve nothing less than early childhood education. All children deserve it.

After Malala Day yesterday, I couldn’t help but really reflect on how incredibly blessed I am to have the opportunity of education. There is nothing more powerful than an education, and an education is what gives us the power to truly change the world we live in.

So let us wage a global struggle against illiteracy, poverty and terrorism and let us pick up our books and pens. They are our most powerful weapons.

One child, one teacher, one pen, and one book can change the world.

Education is the only solution. Education First. Malala Yousufzai 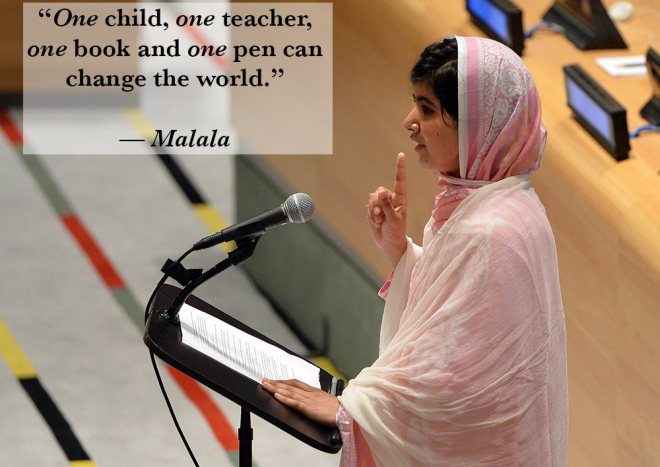 2 thoughts on “In Celebration of Education”