For most of the spring and summer, I’d been looking forward to my time in Venice, Italy, as a three-week break from traveling the United States for my independent research project on educational mobility. Or at least, that’s what I told my advisors, my classmates, my family, and my friends when they posited the completely crazy, totally out-of-left-field idea that maybe, just maybe trying to travel to about twelve different states in the span of about six weeks. (That number bumps up to thirteen if you include Oklahoma, which I didn’t stop long in, per se, but drove through on my way to the Texas Panhandle after being re-routed.)

Inside a church in Slovenia

Turns out, rapid travel is pretty tiring. It’s something I wrote about in my last blog post about Venice and New York, where I found so much magic in the quiet, simple moments in each place. But now, with only about three days left in Italy, I can definitely say that I’ve found peace and rejuvenation.

“Caring for myself is not self-indulgence, it is self-preservation, and that is an act of political warfare.” — Audre Lorde

Spirituality and travel go together. It’s partially why I’m reading On the Road by Jack Kerouac, a Beat Generation writer whose travels heavily influenced his eventual turn to Buddhism (as chronicled in The Dharma Bums, which takes place after the events of On the Road). My friend Jackie* and I have laughed a lot about how this specific leg of our travels—the Veneto region of Italy—feels an awful lot like the beginning of Eat Pray Love by Elizabeth Gilbert. Except that it’s mostly been “Eat Eat Eat” instead. There’s no real time to progress to the third part of that book title—”love”—but there sure has been a lot of time for deep spiritual connection and personal contemplation. It’s just that I didn’t expect so much of that to be in coastal Slovenia.

I embarked to the coastal Slovenian cities of Piran and Koper for about three days total at the beginning of this month, which was when I posted my most recent blog post on Venice. The purpose of the trip was to understand how cities outside of Venice were influenced by the Republic of Venice, and after stepping foot in Piran and Koper, it was pretty clear that these two cities on the very small strip of coast that Slovenia has were very Venetian in character.

The city center in Koper

I’m not gonna lie—Slovenia ended up being my favorite piece of these past three weeks altogether. Koper and especially Piran had all the character of Venice, but with more open space, fewer people, places where we could actually swim, and so much less humidity. It was perfectly timed, too; our excavations in Torcello, which is an island near Venice that’s still in the Venetian Lagoon, came right after returning from Koper, and there’s no way I would’ve survived the heat and exhaustion of an archeological site if I didn’t have the time to rest beforehand.

Jackie and I made the single best decision of the entire trip: going to a spa together. We found one in Koper that was about €40 per person for 150 minutes in a private spa room, complete with a hot tub, sauna, shower mister, and a few bottles of Prosecco. Our professor, Krish, had told us about how great Slovenian spas are; apparently, because salt mining was a major piece of industry in Slovenia, the spas are wonderful, although you’d have to be naked (unlike Italian spas). As it turned out, the spa Jackie and I went to in Koper was less Slovenian—the name “Veneziana” should’ve tipped us off on that—but considering we only knew each other for two weeks, avoiding full-frontal nudity was probably for the best.

Those two-and-a-half hours were some of the most restful, rejuvenating, and reinvigorating hours of this whole last year. Jackie and I had brought our books with us—for her, Anna Karenina by Leo Tolstoy (she’s an English minor after all), and for me, On the Road—but the two of us ended up not spending any time reading since we were so busy talking and really getting to know each other at a much deeper level. We spoke about everything: past loves, our aspirations for life, our visions of how we want society to look, and the pains of losing a friend. That hottub became a site of deep spiritual and emotional connections, where two wandering souls were finally able to come together and begin wandering together.

It’s cheesy, but getting to know Jackie here in Europe has been so incredibly special. Our paths probably wouldn’t have converged on campus—she studies psychology while I study anthropology, our social circles are fairly distinct, and the areas that we devote our time and attention to on campus are different. But starting this spring, after she returns from studying abroad in Madrid and I return from studying abroad at Oxford, we’ll be working together on one of our shared priorities: improving mental health and wellness at Stanford’s campus. The way I see it, my time at Stanford is not just about learning material; I’m here to assemble a team around me. And Jackie is someone who I’m so excited to be working with through the future, as well as just having as a friend!

Jackie and me in Pellestrina, Veneto, Italy

The next day, we left Koper and returned to Venice. But before we left, we made sure to eat well, including having some delicious Thai food made by a woman who served as a cultural food ambassador for Thailand! Since coming to Venice, a lot has happened. We helped out with an excavation for three days in Torcello, where one of us in the group found an infant skull. That was pretty freaky… especially since we didn’t expect to find any actual human remains and had been joking for the past week about our trip not being complete unless we find a human skull (be careful what you wish for!). I spent a morning at a cemetery. And I started working on my final paper for this class: an examination of the exertions of state power and the development of biopolitics in the Republic of Venice, using the Jewish Ghetto as a case study.

Right now I’m in Feltre, which is closer to the Alps. I’ve been sitting outside at a café, drinking an espresso and letting the cool breeze cleanse me. It’s been a pretty emotionally draining last couple days. I’ve been having trouble shaking the weird realization of my mortality after seeing that human skull. Going to a cemetery the next day didn’t help. I had a painful falling out with someone dearly important to me, and I turned to the friends closest to me for comfort—the time zones don’t help, but the love and support they’ve given me have only solidified my belief that I’m assembling the best possible team around me I could ever have. I’m incredibly proud of how I handled the whole situation with a sense of dignity and grace that was consistent with how I believe people should be treated, even when that same respect and kindness is not reciprocated. 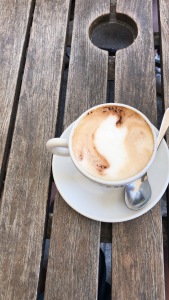 My brother is in the hospital for pancreatitis. He’s been so kind and loving about trying to make sure that I don’t worry from 5500 miles away, but it’s hard not to be worried about him every waking minute. I’ve been visiting quite a few more churches, and every time I go, I make sure to light a candle and say a prayer for both him and me.

Before I know it, I’ll be back in the United States. I’ll be making a return to New Jersey to visit Whitney again (who made an appearance in my post about New York City). It’s been a whirlwind of a trip, and it’s not even over! Truly, it’s been such a clarifying experience already. But until then, I’ll just continue sitting here, in Feltre, watching the rain and finishing my espresso.