I’d like to mention that this post definitely goes over key parts of Columbia University, partly because I want to share what I learned with all of you AND so I can actually remember everything when college admissions season rolls around.

I’ll be honest, I think I fell in love with Columbia University.

And how can you not fall in love with this Ivy League school in New York City? When I was in New York in July, Columbia University was my second stop—after Times Square the night before. Since college is on the horizon (sort of) and most people my age aren’t thinking about it yet, I might as well get a jump on it, right? Most people don’t realize this, but I’m going into my sophomore year of high school in about one week.

So there I was, sitting in Low Library and listening to people from the admissions department talk about Columbia University—their different programs, their engineering school, stories, and anecdotes—while surrounded by people who were actually going to start the application process this year! Um, whoa, just whoa.

Fun fact about Low Library, there are no books anymore! It used to have so many books that the library itself was beginning to sink! They had to move all the books out and put it in a new library building.

There are 10 parts to the core consisting of six required courses ranging from philosophy to art to literature and four extra requirements for science, foreign language, Global Core, and physical education.

Because New York is so rich in the arts, many music and art classes will have required homework where you have to go to a museum or an opera in New York City and complete an assignment based off that. Honestly, that sounds pretty cool. (Students from Columbia get discounts or even free admission a lot of the time.)

The Foreign Language requirement includes two years of a foreign language, anything from Arabic to Zulu. They have some uncommon languages including Bengali, Tibetan, Sanskrit, Wolof, Swahili, and… Tagalog.

The Global Core requirement is to help lessen the Eurocentric biases of the other classes. Because let’s be honest, American education really does stress the study of dead white men.

And probably the strangest requirement is Physical Education. But aside from your usual basketball, football, etc., you also get yoga, judo, karate, and some others. Plus, there’s a beginner’s swimming course!

You read that right. In order to graduate from Columbia, you have to pass a mandatory swim test. This isn’t unique to Columbia—Cornell, Dartmouth, and MIT have it too—but it’s definitely… odd.

Way back when, Columbia feared that the British would come back to invade only Manhattan Island and the only way to escape would be to swim away. But, it stuck.

You have to swim three laps in the pool without stopping or take beginner’s swimming to fulfill the requirement. Engineers don’t have to take the requirement because in theory, they could build a boat or a catapult to get them off Manhattan.

So what makes Columbia different from other New York colleges (like New York University) is that Columbia has an actual campus. Located in Morningside Heights—the 2nd safest part of New York, only behind Central Park which doesn’t have any people living there—Columbia University is gated off from the rest of the city, and the campus is just plain beautiful.

The nice thing about that is you can avoid the hustle-and-bustle of the city when you need to. You don’t have to be completely consumed by it—you always have the quieter Morningside Heights to fall back on! 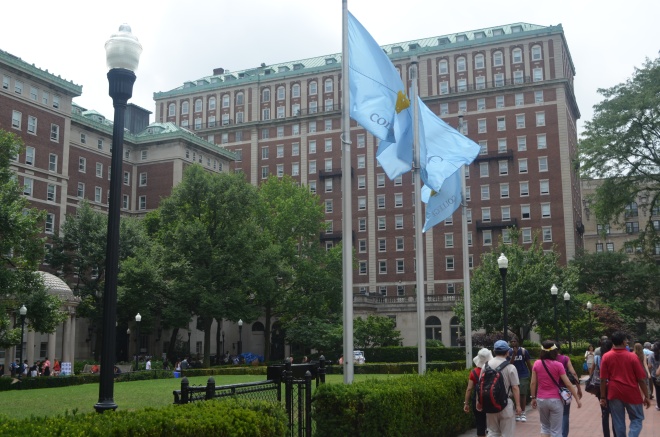 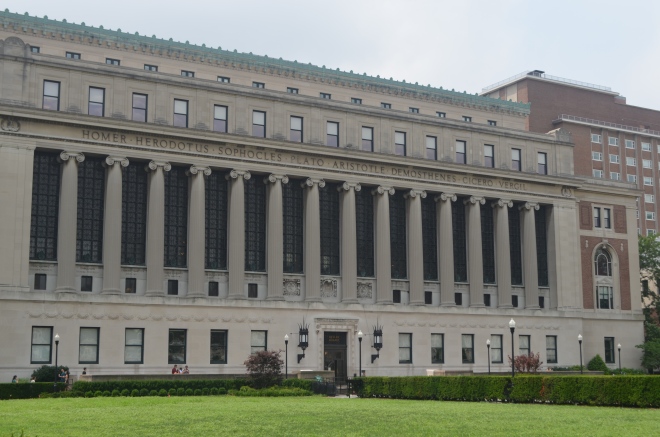 Well, now I’m completely sold on Columbia University and I’d love to spend my college years there. You get the beauty of New York City, the Ivy League prestige, academic freedom, access to great internships, and more.

So definitely, it’s not easy to get in. But I think if I work hard enough from this point, I have a chance—even if it’s slim. And to remind me of my goal, I bought a Columbia academic planner.

It’ll be interesting to see how these next few years play out and where I’ll find myself three years from now. Who knows, maybe you’ll get to see another update from me in a few years saying, “I got in!”

12 thoughts on “Falling in Love with Columbia University”